The sun shone for both days of this years Askersund Festival and we had two wonderful days kayaking and coaching in the archipelago at Bastedalen.  On both the Saturday and Sunday we ran two sessions, a morning one looking at forward paddling techniques and an afternoon one working on towing, recoveries and rescue techniques. Of course there was the usual appreciation of kayak design, paddle features and what works for some and not for others.

“Set up, stab the fish! drop the knee and push on the toes, turn the body/shoulders then lift the paddle as it reaches your hips. A straight lower arm at the catch and an angled upper arm at shoulder height! The paddle blade makes the path of a J and leaves the water away from the boat!”

It sounds easy but is rather hard to learn, particularly if you’ve been paddling for years with low arms and bending your elbows to power the stroke.

In the afternoons we looked at towing lines and saw so many variations on the theme. Good discussion on the features that seem a good idea and those that could prove problematical. We set up and tried toggle tows, contact tows, in line single paddler tows and rafted tows. Everyone seemed to realise that to use a towline in anger you have to practise with it again and again.

For rescues and recoveries we practiced X rescues and added in the option of a tow to hold the rescuer off the rocks.

Therese and I met some wonderful new people and saw such a lot of really good improvement and learning.  The discussions as always were vibrant and fun, in both English and Swedish.

We look forward to meeting up again and to running more coaching and technique sessions in Sweden soon. 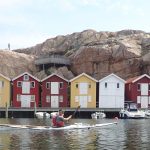