We launched at Gryt after a few days rest feeling much better, the coughs had almost gone and we had agreed to enjoy the places, to stop and swim and make the most of our being there. Although the wind was still very much in evidence it didn’t really bother us as we passed between Vaggö and Haskö, heading for our favourite island of Adskår. A perfect camp spot and a visit the next day by very good friends with food made us happy and delighted to be in the St Anna archipelago. We paddled gently on the next evening and stumbled across a stunning campsite with smooth rocks for landing and great evening views.

A family of goats arrived the next morning, looking for a free meal but giving us a much needed incentive to get going. We quickly found ourselves approaching Arkösund and tied the kayaks up in front of the sailing club there. The sailing club also had a very welcoming cafe with views over the lifeboat station and the bay below. As it was scorchingly hot we picked up some fresh supplies and had lunch in the shade before continuing North. We found the hidden cut through the reeds to pop out into a pretty patchwork of islands. Although a few local kayaks were paddling about and we saw the odd yacht and motorboat it was very peaceful and calling out for a swim stop.

After a swim with a diving spot from Södra Törnsö we took a bearing and headed out across Bråviken on about 45 degrees. Passing a navigation buoy leading into Oxelösund we camped on a very small island in a cluster marked on the map as Melskären. Eating our rehydrated freeze dried meals  we were treated to a dramatic display of aerobatics by the common terns who rather resented our intrusion. The payback came the next morning when at 04.30 one sat on a rock near the tent and screeched and yelled until we were very much awake.

We left early and paddled into a brisk 8 to 10 m/s wind, heading North East. A steady stream of sailing yachts seems to be motoring our way or sailing downwind under foresail alone. We had lunch on a bare rock with dying birch trees and many motor motor boats moored in all the best places. We paddled into the Stendörrans Nature reserve where bridges had been built between the islands, giving access to people without a boat. Lots of yachts were moored near the impressive visitor centre there, presumably waiting for the wind to turn.

Leaving Stendörrans we were swamped in a narrow channel by the wash from a big motor boat at speed! As we approached Stockholm there were noticeably more boats and more people.   Camping on Trigöta we made an unpromising little ledge into a great little site.

We managed a swim and were glad we had switched to Therese’s Hilleberg Unno tent with it’s smaller footprint it was perfect for use on rocks. In the morning two sea kayaks paddled by and offered us anything we needed from a house a few km away. We picked up some water and turned to face the wind once more, from the East this time and about 10 m/s. After paddling to the light at Tratbåden we island hopped to Gråskär with its lighthouse where we chanced upon a perfect landing spot, a small rocky kayak harbour with slabs facing the sun and a great swimming place. The Whetman tow lines jammed perfectly in rock cracks to hold the loaded boats in place.

As we continued East the wind picked up, we overtook a motoring sailing yacht as we approached the firing range on the South end of Askö. Very lumpy seas made things a little tricky as we pushed and dug deep  to make the shore of Ören, still straight into the wind. The Pace slammed and bumped in the short steep waves whereas the Xplore S seemed to take the rough water more easily. We turned into a small bay and were glad to find a (slightly too upmarket for us) restaurant at Akarudden.

We pushed on behind islands and then took an inside route towards  Nynäshamn, passing through the Dragets canal, built by the Swedish king to avoid his ships having to go on the rough water outside. Arriving in the bustling little port of Nynäshamn there were sailing yachts and motor boats everywhere. The ferry to Gotland was about to leave and the quayside was busy with bicycles and holiday makers. We stopped here, enjoyed a rather fine meal and checked into a hotel.

With continued headwinds we had found the past few days hard going. Accepting smaller distances and enjoying more swims and nature stops had made it much more enjoyable.  The presence of many more boats and people made us appreciate the peacefulness of the earlier section on St Anna archipelago. However, a new question had loomed on the horizon. In the North of Sweden huge forest fires were burning out of control, the ground was scorched and dry. The blocking high pressure weather system that had brought us frustrating North or Easterly winds for the past three weeks had also brought exceedingly high  temperatures to Sweden. From friends in Friluftsframjandet we learned that the use of cooking stoves was now prohibited in large parts of Sweden. Neither of us fancied cold freeze dried meals and we took this as a good reason to pause our tour for now, at least until the weather turns and the stove restriction is lifted.

Therese may be short time as she will need to return to work. Kevin is hoping his scientific work can be flexible and hopes to be able to complete the Swedish Coastline. 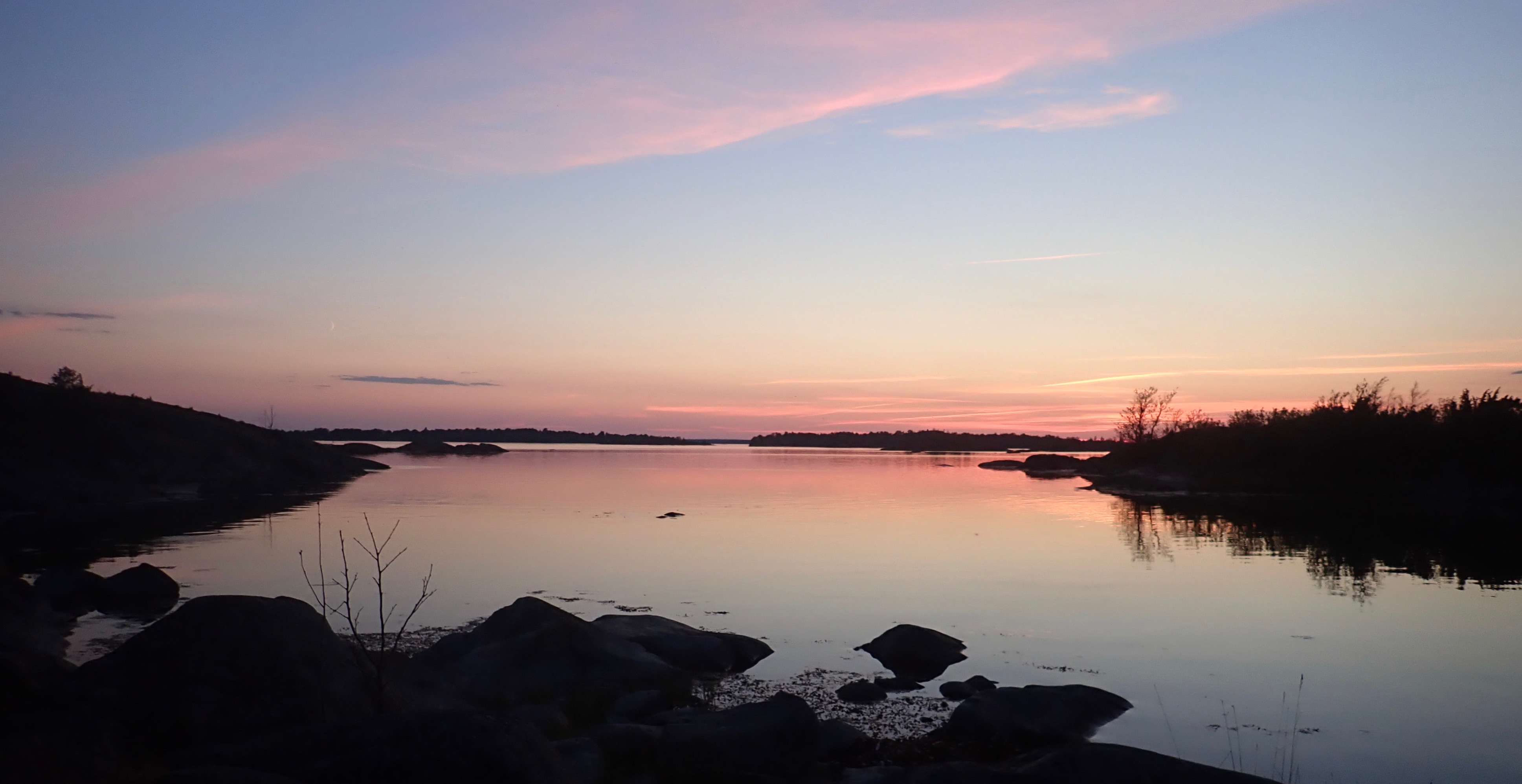 Kayaking with yoga, starting from Tyrislöt